An informal meeting and successful working bee was held at the Obi hall on a windy Sunday afternoon.

Will and Cindy MacDonald provided the wire netting used to block up the holes. The gaps in the weatherboards were covered over with tin sheeting.

The Hall was also swept of bird droppings, hopefully for the last time.

Pam and Cindy had a competition to provide the best afternoon tea. Both came well prepared each bringing their own hot water supply. The result. Equal 1st place. 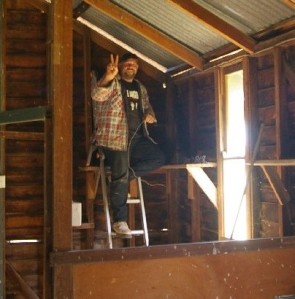 As most of the afternoon was taken up with the working bee, there was no time for a formal meeting. Bob Dyer called in during the afternoon and helped providing information regarding grants and the renovation.

Roger Todd’s latest drawings were discussed. These new drawings include a proposal for a large kitchen and verandah on the northern side of the hall. At present the hall has no kitchen facilities and there are three options for the establishment of a kitchen being explored.

1. Small, in the existing sectioned off corner.

2. Add a small section beside the stage.

3. The large kitchen and verandah extension.

The use of the space under the stage for water storage was a option raised.

The meeting finished late in the afternoon with all being happy with the results obtained.

The next meeting will be a Management Committee meeting on the 27.05.08.

Comments can be made by using the “comments” tag below