In spite of the wet weather, a morning working bee will still be held this coming Sunday, the 14 th April, starting at 9.00 am.

We may have to restrict work to inside the hall.  Completing the fence around the water tanks will be too awkward,  it’s very boggy in that area, but running a poly pipe under the hall for a  tap at the front may be possible, and we can  still re-arrange the under stage storage area. There is a wedding booked starting  from the following Thursday, so a hall cleanup and will have to be carried out. Mowing should be done on Sunday, but the weather! 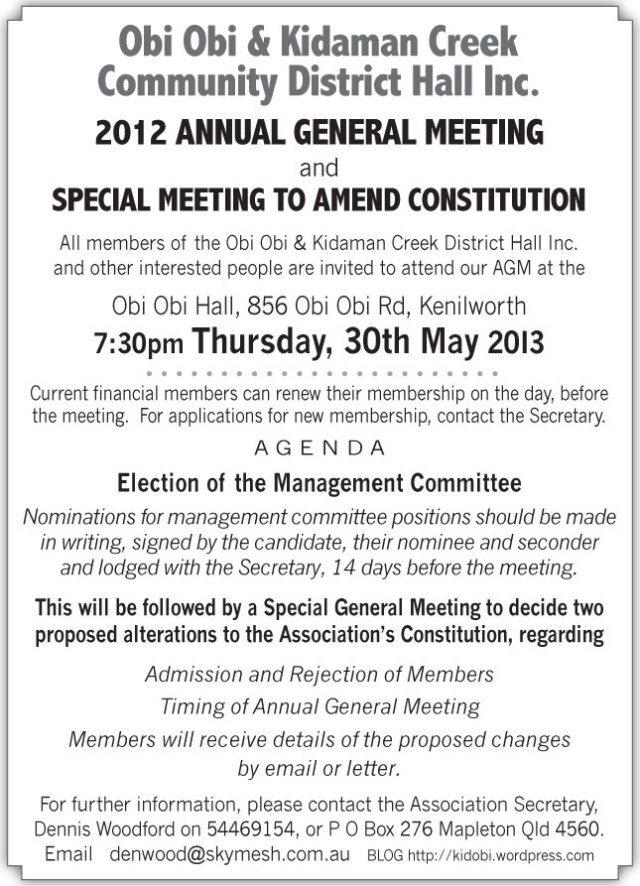 By way of two special resolutions.

Resolution 1. Admission and rejection of members.

Clause 7 (2) states that – Any applicant who receives a majority of the votes of the members of the Management Committee present at the meeting at which such application is being considered shall be accepted as a member to the class of membership applied for.

Amend to – Any applicant who receives a majority of the votes of the members of the Management Committee present at the meeting at which such application is being considered shall be accepted as a member to the class of membership applied for, subject to ratification by the Association’s members at the next general meeting.

Clause 20 (1) states that –   The annual general meeting shall be held within three months of the close of the financial year.

Amend to – The annual general meeting shall be held within six months of the close of the financial year.

Some suggestions by a member

Decide on a theme. One idea is to celebrate  the milestones over the past 100 years.

Apply to Sunshine Coast Regional Council for a grant to support the  Obi Obi and Kidaman Creek event – try and get enough to pay a music act that is known that could headline the evening – and a firework display.

Look into other funding sources – grants for community groups.

Contact Sunshine Coast radio stations and get one of them to commit to attend and broadcast live for at least some of the day and hand out stuff (commercial radio stations have stuff to hand out for free).

Invite people such as vintage car clubs, steam engine boffins, local historical societies to set up displays in the hall, local or even Nambour RSL – there must have been a significant number of local families sending their sons off to war – they may have something to display and may want to support the event.

An art competition – come up with a theme that is linked to the 100 years – get sponsorship for prizes.

A pet show or  something that people like to see.

Get someone to come and put on a display, like people with Clydesdale horses.

Advertise for buskers, have a busking competition – prizes don’t have to be huge.

Use the Mary Vally Voice to get to the wider mary valley community.

Have a bike show and car show.

If it’s a big event, there could be a small entrance fee to make  it more affordable.

Sunshine Coast Regional Council has made an information request to the Department of Community Safety (DCS), asking for more information on the siting of the fire shed on a flood plain. The DCS acts on behalf of the Queensland Fire and Rescue Service (QFRS) Rural Operations in regard to Rural Fire Brigade properties.

1.  A barrier along the Staves Rd hall side of the hall property which would  stop vehicle access to the front and side of the hall, keeping this area for outdoor use. A suggestion is to have something that you can sit on, like the barriers in the resumed area on the junction of Obi Obi rd and Kenilworth/Eumundi Rd at Kenilworth.

3.  Clean up the old timber on the fire shed site.

John and Lynette Cutmore have discovered baby Mary River turtles  in the Obi Obi creek. This is the first definite proof that Mary River Turtles nest and hatch out in the Obi Obi Creek, it was previously thought that they may but the Mary River Catchment Coordinating Committee (MRCCC) and University of Queensland’s Adjunct Associate Professor Colin Limpus had been unable to find any evidence. The existence of  Mary River Turtles in the Mary River was one of the reasons for the rejection of the Traveston Crossing dam. 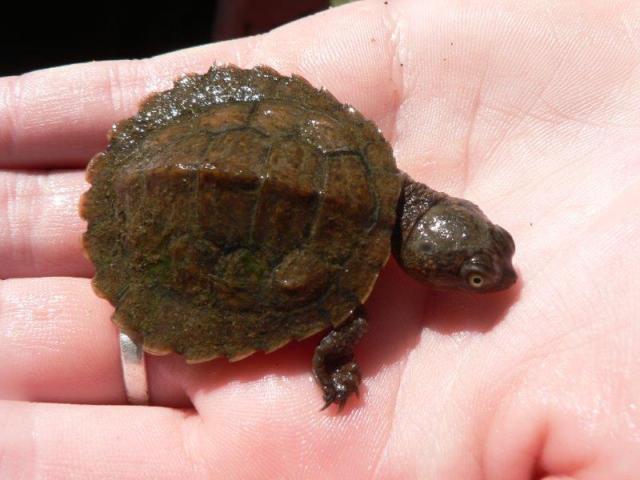 When hatched they are about the size of a 50 cent piece, and can live for about 30 years. this turtle is around three months old.

Recently in this locality, larger numbers of older juveniles have been observed, this may it may be due to the number of  dingoes and foxes  shot and trapped. Dingos and foxes take an enormous amount of turtle eggs.

In the 1960s and ’70s, thousands of  turtle eggs were collected along the Mary River catchment, hatched for the pet shop trade and sold as  “penny turtles”.

This turtle was found nesting along Baxter Creek which runs into Obi Obi Creek. 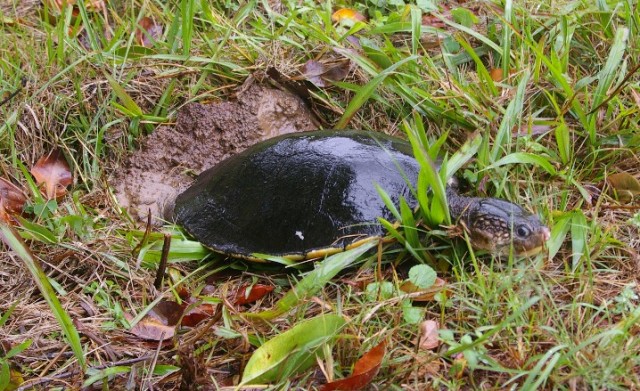 Turtles lay one clutch per year of around thirteen eggs. 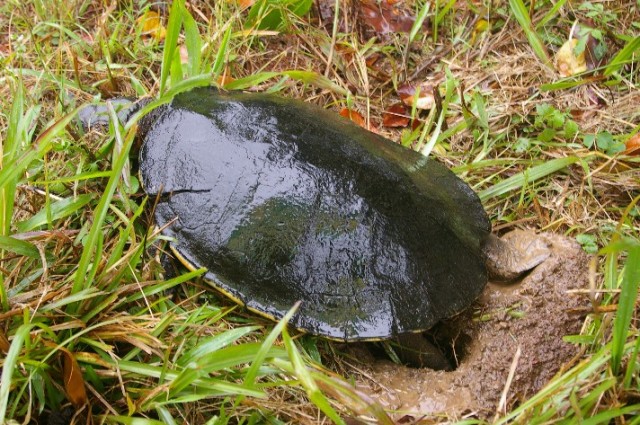 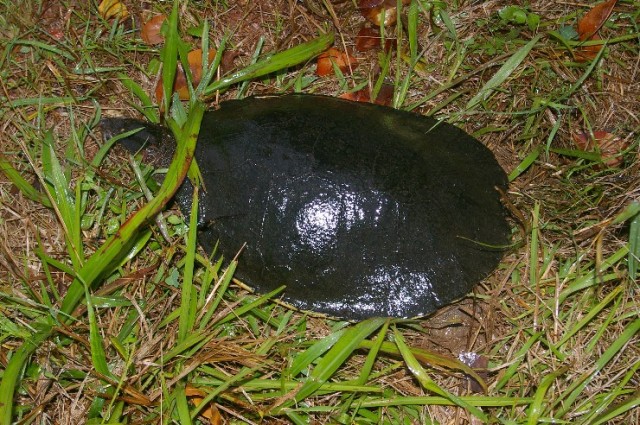 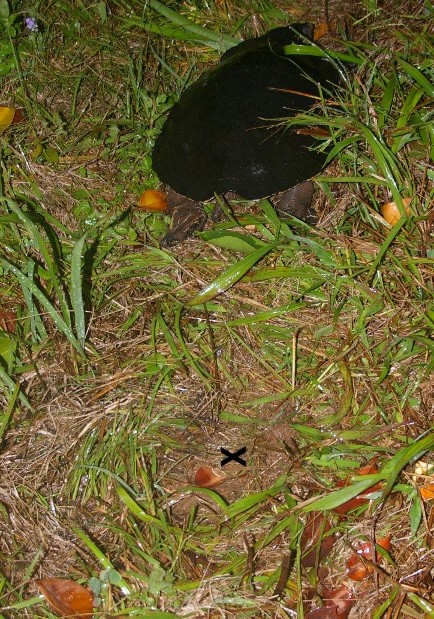 Leaving after camouflaging the nest, X marks the nesting site.